I've gotten a couple of custom orders in the last couple of weeks. Always fun!

The first one was easy. One of my customers wanted me to supersize the bars! My bars of soap are fairly large ... around 5 oz each. She wanted bigger bars please! I said certainly! :) She asked for patchouli. So I went with the same recipe I used a couple of weeks ago, and I cut the bars at 1 1/2 inches wide instead of 1 inch. They look huge. And smell great! 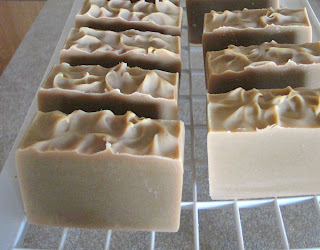 And here's a pic of the soap still in the mold, going through gel stage, along next to a batch of Salty Citrus .. 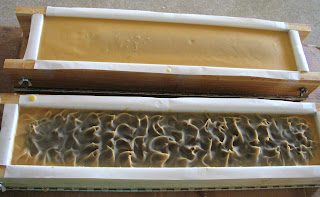 Another customer asked me if I could put up a gift set for her mom's birthday. I said, yes indeedy I can! She let me chose the soaps, so I went with color coordination. All green Eucalyptus Mint, green layered  Green Cactus, all red Sandalwood Vanilla, red layered Ginger Lavender, and neutral colored Goat Milk Fragrance Free. 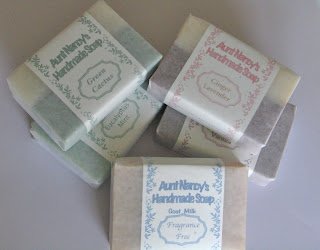 I wrapped them in tissue paper, and added ribbons. Silver foil, gold foil, and turquoise colors. 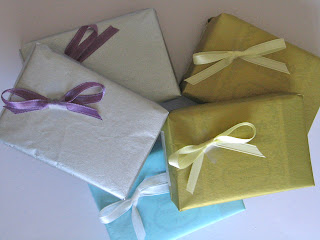 I decorated a white gable box with birthday clipart, printed on a sheet of clear label, cut and placed stratigically around the box. 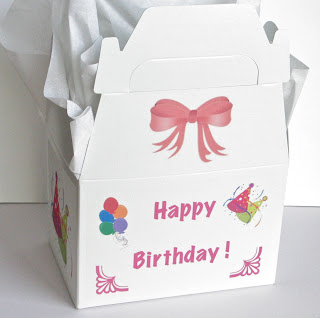 The 5 soaps fit perfectly in the box! Nice and snug so it will ship securely. 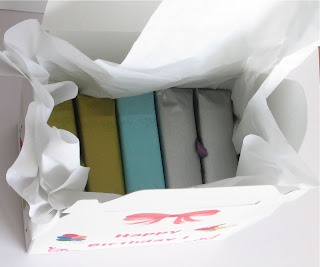 Added a lip balm and 3 tiny hand crocheted cotton face scrubbies that I bought on Etsy a while back when I was still doing farmers market and did up little gift bags. 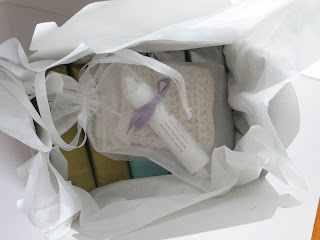 Filled the rest with crumpled white tissue. Closed it up, and added a handmade tag that I bought on Etsy. Or maybe I traded some soap for some tags, I don't remember. 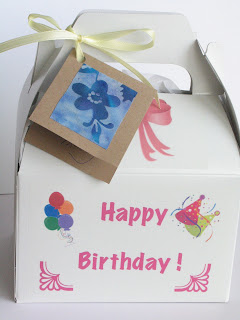 Wrapped it really well in bubble wrap, put it in a box, and it's on it's way to the birthday mom! :)

I'm thinking I should offer these in my shop. For any occasion. Something to think about. Let the customer pick the occasion and the soap. Hmmmmmmmm

I made a fun soap last week.  A five layer soap! I used Cinnamon Sticks fragrance oil to scent it, and red oxide to color it. I'm happy with the results! 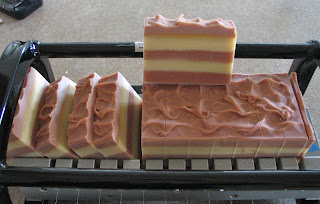 The top layer bled a bit into the next layer, but that's ok, I don't think it detracts at all. Ray thinks it looks like a raspberry pudding cake. :-D I think it will make a nice holiday soap. 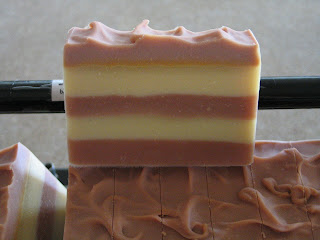 Posted by Aunt Nancy at 1:04 PM No comments:

The Goodwin's are not doing a lot this weekend. Mostly hanging around the house. The weather man has promised cooler weather (90's instead of the 100's), and lots of rain. So far. no rain, just fluffy white clouds in a blue blue sky.

Last weekend we did get out and about. Took a drive up Mt. Lemmon. It takes almost an hour to get from this side of town (the southwest corner) allllll the way over to the northeast corner. We got to the base of the Catalina's at around 8:30 am, and the temp was already 90 degrees. It's 25 miles up to the top of Mt. Lemmon. We went as far as the Loma Linda picnic area, which is about 3 miles from the top. It was a wonderful 76 degrees with a refreshing wind. So we sat for awhile under the piney trees enjoying the coolness.

I stole one of Ray's pics to show you here. If you want to see more, go to his blog Sonoran Connection. 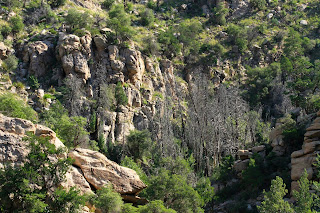 Ray took that pic at one of his favorite places along the upward road to stop and take pics. I always yell at him about it because it's not a very big pull-off, and we're never far enough off the road to please me. He still stops there almost every time.

This week, I made a couple of soaps ... are you surprised ??? :) One is a Patchouli soap I have been thinking about for awhile.  The other is Egyptian Dragon. I did up a pot of goat milk soap. I had a bit of a What The Heck moment when I poured the lye mix into the oils. It immediately started to clump up a bit. I was worried that it would either rice up or seize up on me. But stick blenders are magical things and once I started blending, all was well. I think it happened because the lye mix was rather warm, and the oils were room temperature. Usually, my oils are a little warmer than room temp because I completely melt my coconut oil in the microwave. However, I had just gotten a new batch of coconut oil and it was still completely melted from shipping. A 50lb pail of coconut takes a LONG time to harden back up after traveling in 100+ degree weather!

I split the pot in two. For the patchouli soap, I added a big helping of honey. Then, a LOT of patchouli! Usually I skimp a bit on the patch because it's so darn expensive, but I didn't this time. And, I added a bit of gold mica. Other than the gold mica, I didn't bother trying to color it because between the goat milk and the honey, it's going to be a brown soap. Now, I've done this same recipe (same oils, goat milk, and honey) with my Honey Eucalyptus soap and that soap is so sudsy and silky, I've been using it a lot in the shower. And been wanting the same thing in straight up patchouli. So, this is it! :)

The other half of the soap pot, I scented with Egyptian Dragon, and added a little bit of green topping .. like dragon scales you know. 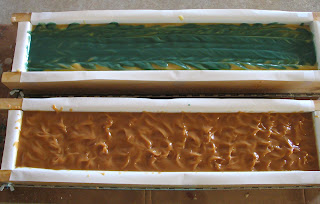 Here's the Honey Patchouli going through the cutting process .. 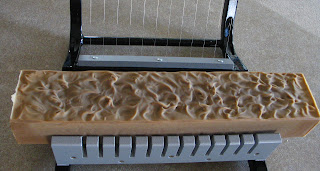 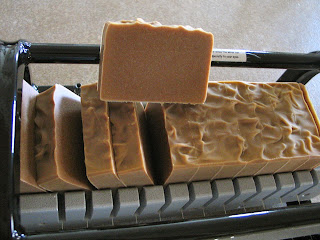 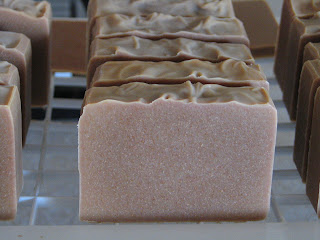 It smells WONDERFUL right now. I can still smell the honey, and mixed with the patch it is fantastic. I hope the honey scent doesn't fade too much!

And here is the Egyptian Dragon. I expect it to darken up a bit. 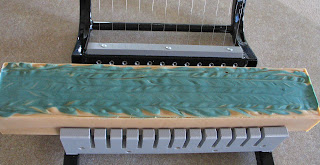 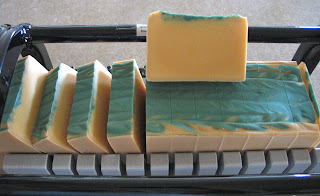 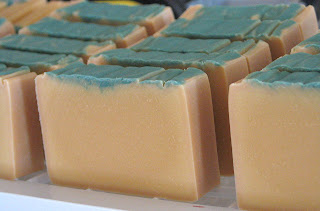 The Sandalwood Vanilla and the Fresh Cut Rose soaps have been listed in my Etsy shop. Now I need to get on the ball and get them listed on my website. 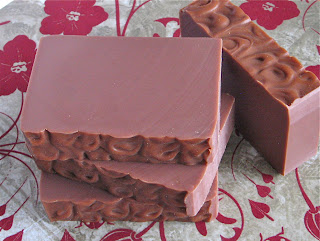 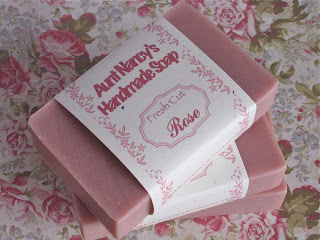 I've been hooked on a word game that I got from Big Fish Games called BookWorm Deluxe. Anyone try this game? I'm up to level 25, but the longest word I have been able to spell is only 7 letters longs. I think I need to improve my vocabulary !!!

And, for my sisters, Dakota finding the only patch of sun available! 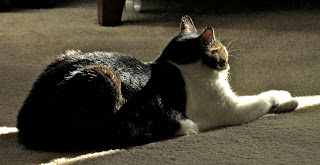 A Couple of Soaps

A couple of soaps I made this week. One, scented with essential oils, no color added. The other, scented with a fragrance oil, layered, colored with oxide and mica.

This is the essential oil blend. Spruce, Lavender, Sage, Palmarosa, and Patchouli. This is one of my favorite lavender blends. The essential oils allow the soap to trace fairly quickly so I pour it at a medium to thick trace. This lets me play frosting on the top of it, making waves and swirls in the top of the soap. 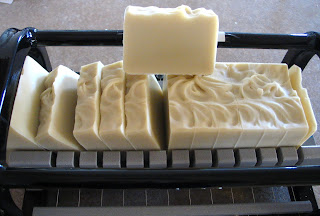 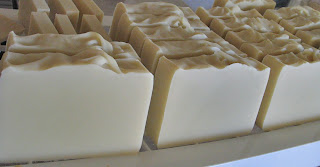 And this is the fragrance oil soap. Amber Romancing is the name of the fragrance oil. It's phthalate free, as is all the fragrance oils I use. It's a sweet girly smell. :) The supplier describes it as: "A rich combination of amber, African vanilla, and musk with a faint undertone of black cherry." It's nice!  The bottom layer is colored with yellow oxide and gold mica. For the line in the middle, I used white Kaolin clay. 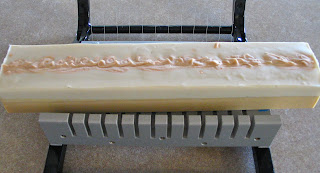 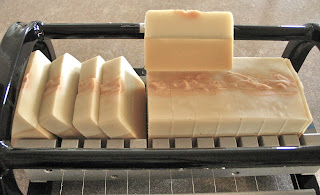 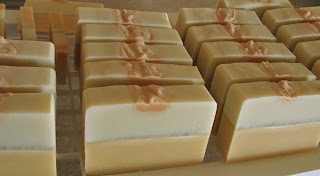 Nothing exciting going on in the Goodwin household. It's been too hot to do anything outside. The weather has been very predictable ... 104-107 temp, monsoon storms in the afternoon.  And the desert is oh so green!

Here's one of Ray's pics of one of the storms coming in near sunset (click on the photo to enlarge". Pretty!! 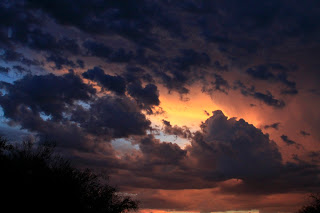