I am giving away one bar of soap (your choice!) to one lucky reader. To enter, just add a comment here with your email address (if you aren't registered with Blogger) and I will draw a lucky winner on Nov. 2 using random.org to pick the number. Whichever comment number matches the number I draw will be the WINNER! :)

This giveaway is open to the world! :-D

The winner will be announce Monday, Nov. 2. 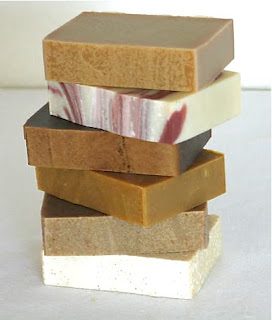 From Ray's collection of photos 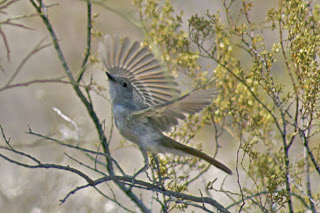 Photo by Ray Goodwin
Tucson Mountain Park
Posted by Aunt Nancy at 8:39 AM No comments: 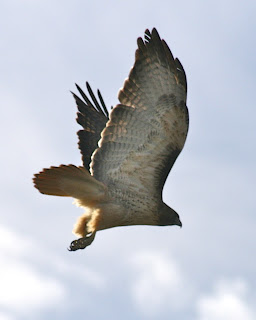 Photo by Ray Goodwin
Red Tailed Hawk in Madera Canyon, AZ
Posted by Aunt Nancy at 10:21 AM No comments:

No Nuts, No Wheat 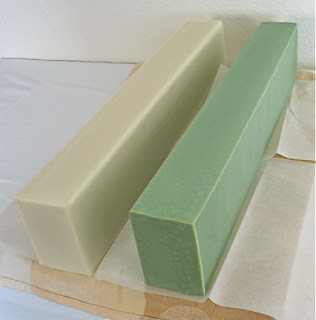 My favorite soap recipe contains wheat germ oil, which my skin loves loves loves. My other two recipes, one with cocoa butter and the other with shea butter, contains sweet almond oil, which helps to add lather to a bar of soap, and is a great moisturizer.

But I have had a couple of customers ask for a soap with no nut oils, and no wheat germ oil, due to allergies. So I tweaked my recipe a little, and came up with a soap that contains olive oil, coconut oil (a seed, not a nut!), grapeseed oil, rice bran oil, and avocado oil. I made my full batch, which fills 2 molds, and split the batch. First batch, fragrance free. Right now it smells clean and sweet, due to the avocado oil. Second batch, colored with green clay and scented with a spruce needle and cedarwood essential oils blend. It smells just like a Christmas Tree! I just turned them out of the molds and so far, so good!! I will cut them tomorrow, and slice off a tiny sliver of each for me to try out. OH, sorry, I can try them out now, but everyone else will have to wait at least 3 weeks before I start selling them. :)

Each of the soap logs pictured are 20inches long. 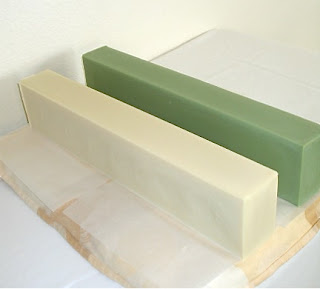 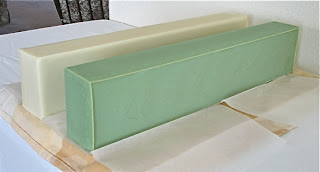 And a gratuitous cat picture, for my sisters. :-D 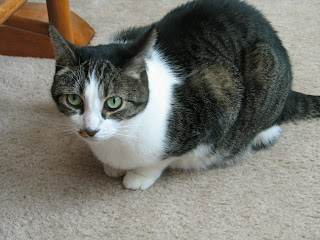 This past weekend, we did a three day craft show in Willcox, AZ. This was the Rex Allen Days festival in Willcox, AZ., which is a 90 mile drive from here. So we had reservations for Friday and Saturday night at the local Best Western.

We got up ultra early Friday morning, and left the house at around 5am, which put us in Willcox at around 6:30. Found our spot in Railroad Park and set up our tent. I had tons of soap, my lip balms, and some whipped shea butter. Ray had some of his photography. 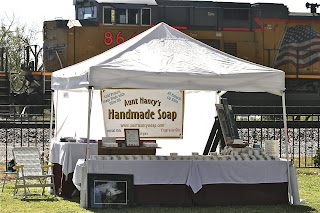 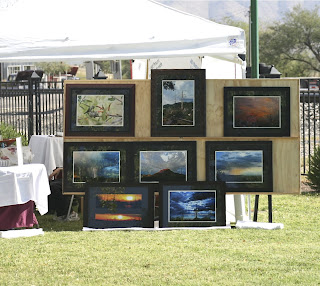 Notice the train in the background? These trains went by about every 20-30 minutes, were about a mile long, and very very noisy!!!! They do not slow down at all, and they blow their whistle many times so people know they are coming! Made it very hard to do a decent sales pitch!

On one side of us was a vendor selling items made from the fleece of her alpacas. She brought along a couple of the animals with her. Look at these faces!! How cute are they!!! 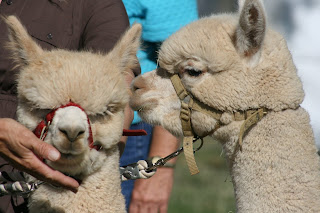 The three day festival was all about cowboys. Rex Allen was a cowboy film star, songwriter, and singer from Willcox, and he was known as the Arizona Cowboy. His horse, KoKo, is buried beneath the large bronze in Railroad Park. 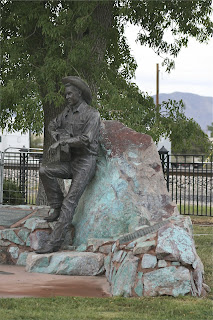 There were a lot of folks around in period costumes. The most predominate was Lee Anderson and his horse Concho. Lee is an Educational Living History Re-enactor, located in Central Arizona, and known as The Vaquero. He has written articles on the subject of the 1880's Mexican cowboy. Concho is a thoroughbred that Lee rescued after Concho sustained career ending injuries in a racing accident. Lee helped him heal and trained him. And my oh my what a show off that horse is! Lee rode around the park all day Friday, and Concho was perfectly happy to prance and twirl around for everyone. 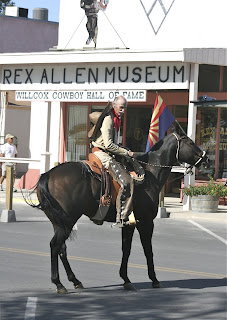 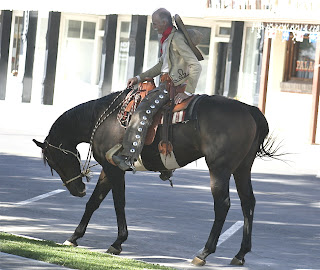 Here's Lee and Concho with one of the other "actors", must be a bank robber! 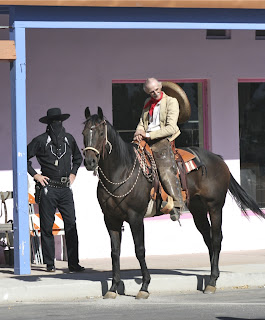 And a couple of other folks in costume. 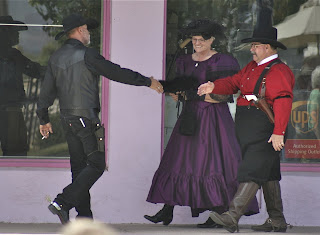 Although there was plenty of entertainment around, there was not much for customers. As a vendor, it was a dismal day. But we were very hopeful for Saturday, because the Rex Allen Days big parade comes right down Railroad Ave. So even though Friday was a bust as far as sales goes, we figured we would make up for it on Saturday. We closed up shop around 5pm, grabbed some supper at the motel restaurant, and crashed. I slept like a log!!

We woke up around 5am, and Ray informed me that it looked like it had been raining a lot. The tent is waterproof, and Ray had packed up all his photography, but you can never be sure if things are going to survive a rain storm. So we got ready, had our breakfast, and headed over to Railroad Park. WELL, my goodness, such goings on! My neighbor on one side had a canopy with no sides, that she left up with gallon water jugs as weights. Her canopy was blown over the fence and almost on the railroad tracks! Our tent, which is weighted with 20lb weights on each leg, plus Ray had bungeed the inside middle of the tent to his photography display which is pretty heavy, was blown 3 feet backwards! So one of the tables which I had left my soap on, covered with just a flannel sheet, was almost exposed! Yikes! Hurried into the tent, the flannel sheets were a little damp, but the soap was ok. Phweew!!

Ray helped our neighbor retrieve her canopy, and we got our set up all arranged and ready. Ray decided NOT to put out his photography, because it was still wet, drizzling, and windy. And it was COLD. So we left three of the tent sides in place, to keep out rain and wind. Our neighbor had her two little grand daughters with her, 3 and 5 years old. She kept trying to bundle them up and keep them warm, I told them to come into my tent until the rain stopped. So I had 2 little bouncing cutie pies in my tent for awhile. :) Didn't sell anything in the cold windy morning. The parade got started at 10am, and Railroad Ave was fully lined with folks (I'll list a link to Ray's blog with lots of parade pics).

So Ray sat up on the sidewalk to get pictures, and I stayed back at the tent to keep an eye on things. I could see most of the parade, except for the little Shriner cars. The sidewalks on both side of the road were lined with people at least 2 deep. When the parade ended, I hurried back into the tent, and got ready. Figured oh, good! here they come! So all these people watching the parade, turned and headed right for me, then went right by me to the parking lot. And they were gone!

Now we knew this couldn't be good. There were a few folks that stayed around and did some shopping, but not many. We decided NOT to stay the night, because we knew that Sunday there would be even fewer folks. We started packing up around 2:30. Once packed up, we went to the motel, packed our suitcase and checked out, and came home.

It was pretty much a break-even event.

Here is a link to Ray's blog with lots of parade pics:

And here's a couple of my favorite pics. Here is Lee again on his other horse, Dusty. Dusty is also a thoroughbred that Lee rescued. 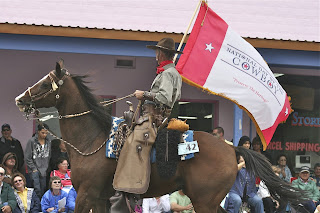 And this is my favorite horse in the parade. What a beautiful pinto pony!! 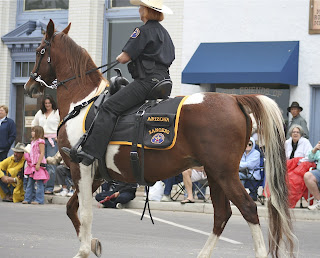 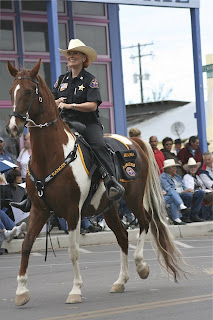