I have had a soap in my soap room that I made in April, of 2009. Yes, 2009. I called it Earthbound because of the blend of essential oils that I put together for it .... Cedarwood, Patchouli, Clove, and Lime. A very earthy scent! And made light swirls with Rhassoul Clay. 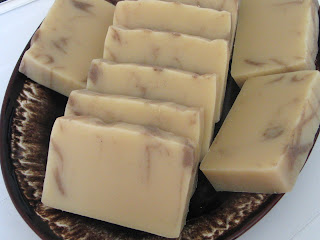 Now, when I made this soap, I went about my soapmaking routine ... mix the lye and water, leave it in the sink while I get my molds lined, my oils mixed, and any scents, clays, and other additives all ready. When I proceeded to mix the lye mixture with the oils, I discovered that the bucket the lye was in had a small leak in the bottom. Since it was unsafe to stand there with a leaking lye bucket while I thought Hmmmm what to do, I went ahead and poured it into the oils. I had no idea how much of the lye mixture had actually leaked out, so even though I briefly thought about adding more lye, I just didn't know how much it would be safe to add. So I didn't want to do that. But not wanting to waste so much oil, I went about my business and made the soap as otherwise planned, not knowing how it would come out.

It was about 3 or 4 days before I could cut it, it was so soft. But cut it I did, and put it on the curing rack. As the weeks and months went by, every now and then I would poke at one of them, and they just never hardened up like my other soaps. I had no problem making an indentation with my thumb.

And finally, almost 3 years later, last week I decided to use one. And you know what? It's one of the mildest soaps I have ever used! Yeah! They are still kind of soft, just a bit tacky to the touch. But the scent is marvelous! Talk about a mellow earthy scent! The lime scent has faded, but the cedarwood, patchouli, and clove are still strong and wonderful!

I keep wondering about the percentage of superfat. For all the none-soapers, a bit of explanation. There is a specific ratio of lye to oils/fat that is needed make sure that ALL the lye has been used and turned to soap in the chemical process that occurs at the meeting of lye and oils/fats. Any amount of oils/fats over that ratio, we refer to as superfatting. I usually superfat my soaps at around 5-6 percent. I'm GUESSING that these soaps are around 20 percent superfat, but I really am guessing.
Posted by Aunt Nancy at 1:28 PM

They are very creamy looking, lovely :)