Yesterday's soaping session was all about the sea!

First up, my Salty Citrus. This is a citrus blend - grapefruit, orange, lemon, litsea -  in a goat milk soap, with a bit of sea salt added. Now, most salt bars are made with mostly coconut oil, and anywhere from 50% to 100% ratio of salt to oils. But, I only use a very small amount of salt. Like around 6oz of salt in 88oz of oils. And I used one of my standard recipes, not one that is mostly coconut oil. The reason coconut oil is used is because soaps made with mostly or all coconut oil will lather even in salty water, and adding salt to soap will inhibit lather. I just use as much coconut oil as I usually use. And not enough salt to keep the soap from lathering.

The second soap, also a goat milk soap, I scented with lemongrass and lemon essential oils, and added sea clay! I expect this to make a very nice soap. Very creamy and natural looking.

The salty soap I made sure to cut last night, after only about 6 hours in the mold. It was still hot! :) Soaps made with salt need to be cut right away or they harden right up like a brick, and instead of a clean cut, you end up with a crumbly piece of soap.

The sea clay soap I cut just a couple of hours ago. And they are both in the soap room curing their little hearts out. 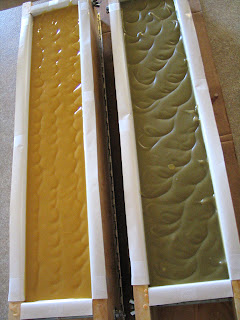 They look lovely! I can't wait to see how they turn out, I especially am loving the colors...so gorgeous!